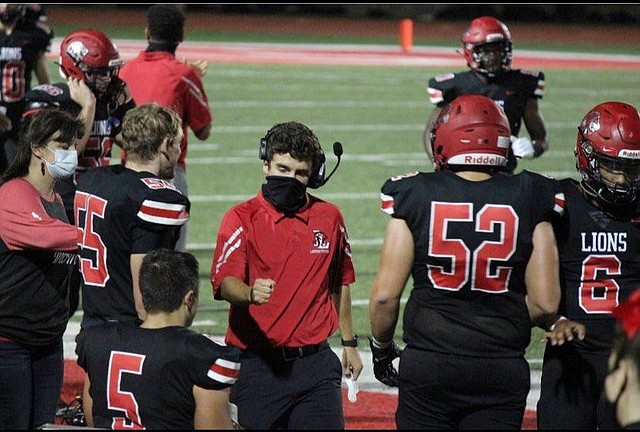 Mason Beach roams the sidelines earlier this season at Lansing High. Beach is the quarterbacks coach for the Lions in his first season at LHS and will face his alma mater tonight when LHS visits Tonganoxie for a Class 4A playoff clash.

Mason Beach has found his way back to his old stomping grounds. But the Tonganoxie High alum who enjoyed much success in front of the home crowd at Beatty Field will be roaming the opposite sideline tonight. Beach, a 2018 THS graduate, is the quarterbacks coach at Lansing, and the Lions will be in Tonganoxie to take on the Chieftains at 7 p.m. for a Class 4A regional playoff clash. “I’ve given plenty of thought to it,” Beach said earlier this week. “It will be weird being on the other sideline.