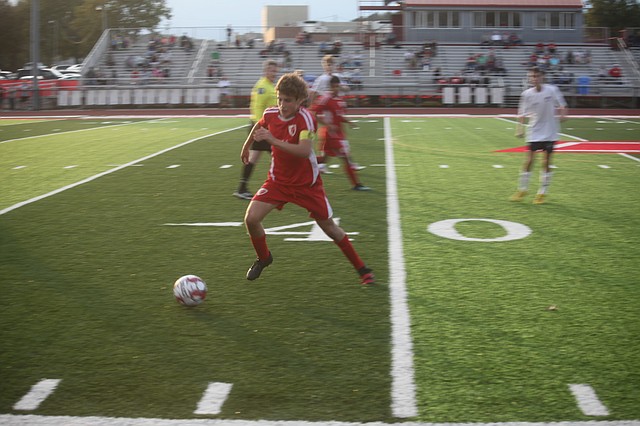 Tonganoxie High junior Grayson Sonntag works to get a touch on the ball Thursday at Beatty Field. Sonntag scored three goals for the Chieftains against Eudora. THS won, 6-0, finishing the regular season 9-4 overall and will be the No. 1 seed in Region 8 when the Class 4-3-2-1A start Monday.

The final tuneup before the postseason went well for the Tonganoxie High boys soccer team. Tonganoxie shut out Frontier League rival Eudora, 6-0, Thursday at Beatty Field. With the victory, THS finished the regular season at 9-4 overall and 6-2 in Frontier League play. Junior Grayson Sonntag had a big day against the Cardinals, scoring Tonganoxie’s first goal and then two more in the span of about 2 minutes in the second half for the hat trick. He scored three of the team’s six goals.