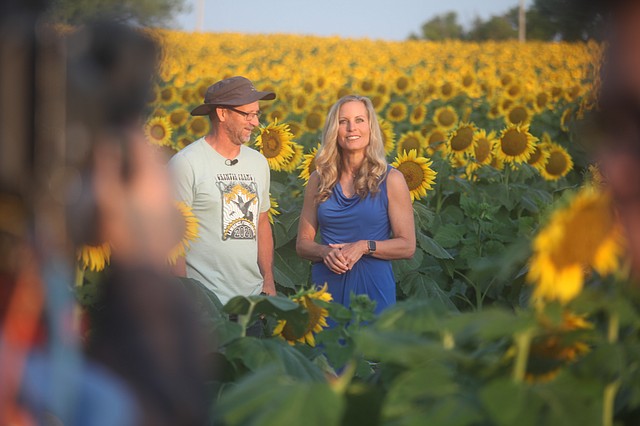 Ted Grinter stands with Becky Worley during an interview Thursday, Sept. 9, 2021, in one of the sunflower fields at Grinter Farms 4 miles south of Tonganoxie. Worley featured Grinter Farms during a Rise and Shine segment profiling Kansas on "Good Morning America." ABC's national morning show is highlighting all 50 states. Kansas marked state No. 30 in the series.

Grinter Farms' sunflower fields were in the spotlight Sept. 9 when "Good Morning America" paid a visit to the Tonganoxie-area seasonal attraction.

Ted Grinter has done his share of interviews this time of year, but Thursday morning’s session provided a new first at Grinter Farms. “Good Morning America” crews were on hand around 7 a.m. to film a segment for the ABC morning show. Correspondent Becky Worley stood in the sunflower fields just west of Sunflower General as a camera rolled. A drone zoomed overhead to get additional shots.