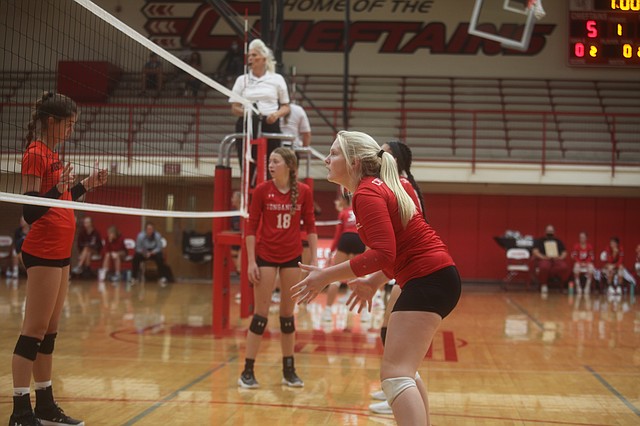 Tonganoxie High’s Jordan Vorbeck is locked in awaiting a Shawnee Mission Northwest serve Saturday during a semifinal match at the Tonganoxie Invitational. The Cougars outlasted the Chieftains and then defeated Ottawa fro the tournament title. Looking on is Kasia Baldock (18).

Tonganoxie volleyball has just a few more matches left before the postseason. THS is 13-17 on the season after Saturday’s De Soto Spikefest. The Chieftains, who have played well in tournaments heading into Saturday’s invitational, had a rougher go at De Soto. THS went 0-4, dropping matches to Mill Valley, Eudora, Blue Valley West and Free State.

Tonganoxie High volleyball had another solid tournament showing. And this time, it was in front of the home crowd.