Benton Smith covers sports and news for The Mirror. Although he hails from the state of North Carolina and graduated from the University of North Carolina, he assures you that neither that place nor the men's basketball team at said university have much or anything to do with him. Benton was a sports writer for the Lawrence Journal-World before coming to Tonganoxie. He is an avid basketball fan and football devotee but finds himself of late enjoying baseball more than he ever thought possible — he is 99 percent certain that is because the Kansas City Royals are actually competitive. Since joining The Mirror staff in February of 2008, Benton has learned that all high school sports, their athletes and coaches are pretty much a blast to cover.

Rock chalk return: Tonganoxie grad and KU alum returning to Lawrence to join KU football staff as director of scouting
By Benton Smith
June 14, 2021
A Tonganoxie High graduate is returning home for a position at his other alma mater. Scott Aligo, who graduated from THS in 2000 and the University of Kansas in 2005, will be the director of scouting for Kansas football, KU head coach Lance Leipold announced Friday. Aligo is one of three new members of the Jayhawks’ support staff. Leipold also announced a new role for another staffer.
Tonganoxie’s Tayber Witt “signs” with KU football team
By Benton Smith
February 8, 2018
Not many college football coaches recruit 4-foot-10, 70-pound wide receivers, but when David Beaty heard about Tayber Witt, the Kansas coach couldn’t resist.
Whitledge named to Journal-World All-Area first team
By Benton Smith
June 26, 2013
A three-time 4A state champion high-jumper, the Chieftains senior holds the school record in the event, with a mark of 5-6.5. Whitledge finished sixth in long jump at state in her senior year, holds school records in the 100 and 300 hurdles and long jump, and leaves Tonganoxie as its all-time career points leader, with 773.
Bartholomew, Soetaert named to Journal-World All-Area soccer team
By Benton Smith
June 24, 2013
Tonganoxie’s Molly Welsh also recognized as honorable mention selection.
Area schools explore best safeguards for concussed athletes
By Benton Smith
July 18, 2012
The words themselves are jarring: traumatic brain injury.
Smith: Bidding Tonganoxie Farewell
By Benton Smith
November 8, 2011
Back in February of 2008, I got my first assignment as sports editor at The Mirror. It was covering the Tonganoxie High wrestling team at a regional tournament in Perry. The Chieftains had a pretty eventful weekend, qualifying Matt Brock, Cameron Adcox, Travis Adcox, Kevin Hamm, Wyatt Coffin and Steve Davis for state.
Tonganoxie soccer wins playoff opener, 3-0
By Benton Smith
08:13 p.m., October 25, 2011 Updated 10:00 a.m.
The Chieftains beat De Soto, 3-0, at home in the first round of the Class 4-1A Northeast Regional 3 playoffs.
Chieftains battle, but fall to De Soto in semifinal
By Benton Smith
October 25, 2011
They might have come up short of making it to a sub-state final, but Tonganoxie High’s volleyball players and coaches didn’t consider Saturday’s semifinal loss to De Soto a failure.
Chieftains ‘whooped’ by Perry-Lecompton
By Benton Smith
October 18, 2011
After seeing his team get blown out in the final home game of the season Friday, Tonganoxie High interim football coach Matt Bond knew exactly what led to the Chieftains’ sixth straight loss.
THS volleyball could face reigning state champs
By Benton Smith
October 18, 2011
Unless he has psychic powers, Tonganoxie High volleyball co-coach Brandon Parker must have the Thunder on his mind. 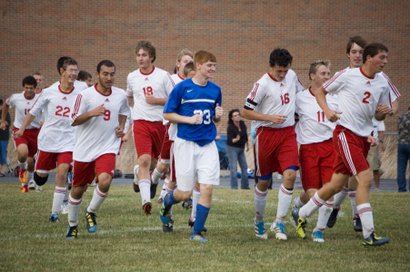 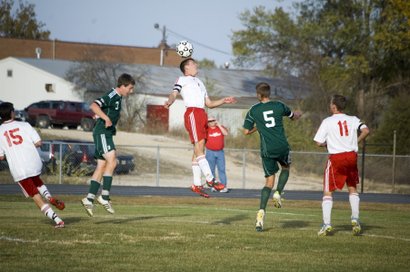 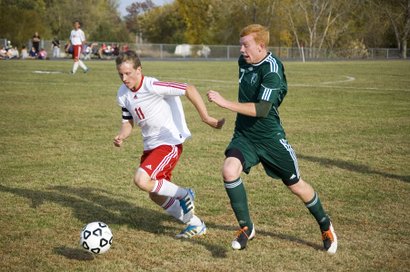 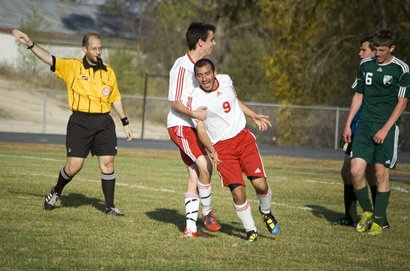 THS senior Joseph Parrino runs back toward midfield after scoring a first-half goal in Tonganoxie's 3-0 home playoff win over De Soto on Tuesday. 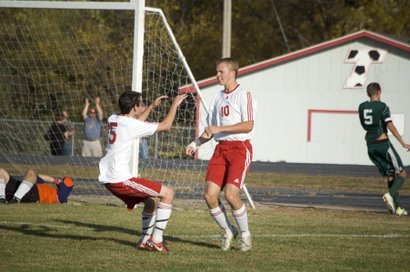