Nutter: Savoring normal in extraordinary fall season in Tonganoxie
By Justin Nutter
November 12, 2020
Years from now, when we tell our grandkids stories about 2020, “normal” isn’t a word we’ll toss around too frequently. March Madness ended before it started. The Olympics were put on hold for the first time ever. Everything from weddings to middle school gym classes were moved to Zoom. Election Day lasted roughly 90 hours, give or take a few.
Record high of 55 for Tonganoxie football
By Justin Nutter
November 3, 2017
With Basehor-Linwood’s defense keyed in on the middle of the field, Dalton Bock knew he’d come close many times. The Tonganoxie running back had been one step from breaking through the Bobcat secondary on several carries, only to be tripped up from behind. Finally, midway through the fourth quarter, the Chieftain senior saw an opening. He split the safeties and scampered 55 yards to the end zone, putting a 55-year-old drought to rest.
Loading the schedule in McLouth
By Justin Nutter
April 26, 2017
In 11-plus seasons under coach Ballard Patterson, lopsided wins have become a theme for the McLouth High softball program. With a roster full of young talent and the team’s first-ever state championship in mind, the longtime coach decided it was time for a change of pace. Patterson has loaded the Class 2-1A Bulldogs’ schedule with traditional powerhouses from larger classes, giving his team a steady diet of stiff competition leading up to next month’s regional tournament.
‘Coach K’ stepping down at Tonganoxie
Kroll ending stint as THS’ winningest soccer skipper
By Justin Nutter
April 26, 2017
In 2008, Brian Kroll arrived at Tonganoxie High as an assistant boys soccer coach, joining a program that had experienced some success in its first 16 seasons, but very little since the turn of the century. He took the reins as head coach two years later and has since transformed the Chieftain program into one of the area’s elite. Now, after rewriting the THS history books for nearly a decade, the man known to his players as “Coach K” has decided it’s time to pass the torch.
Turnovers doom Tonganoxie football in district loss
Chieftains eliminated from postseason
By Justin Nutter
October 27, 2015
For the second week in a row, Tonganoxie High put itself in position to score multiple times against a district opponent. But, just like in their district opener, the Chieftains couldn’t overcome a multitude of untimely errors.
Jeff West outlasts Tonganoxie girls
By Justin Nutter
January 28, 2015
The Tonganoxie High girls entered their home invitational with a goal of two victories. A win in the consolation semifinals put them in position to make that happen, but they couldn’t replicate that success in Saturday’s finale. THS committed 18 turnovers and couldn’t overcome a 26.5-percent shooting performance in a 42-29 loss to Jeff West in the fifth-place game of the 12th annual girls tournament.
THS boys struggle down stretch against De Soto
By Justin Nutter
January 28, 2015
For nearly three full quarters, the Tonganoxie High boys had themselves in position for a fifth-place finish in their home invitational. However, a plethora of mistakes down the stretch quickly derailed the Chieftains’ chance for a successful tournament finish.
Crucial missed shots thwart Tonganoxie High boys’ chance for road victory
Mill Valley hangs on in tight game
By Justin Nutter
January 18, 2015
For most of Friday’s visit to Mill Valley, the Tonganoxie High boys had themselves in position to win. However, a series of missed shots in the fourth quarter proved more than a little costly. THS trailed by just five points entering the fourth quarter, but the Jaguars pulled away late to hand the Chieftains a 53-46 loss.
Tonganoxie High girls make strides in loss
Team nabs first victory against Turner
By Justin Nutter
January 18, 2015
David Hall sensed the Tonganoxie High girls had started to turn a corner in their first win Jan. 13 against Turner. The Chieftains weren’t able to replicate that success Friday at Mill Valley, but further progress was still evident in the eyes of their coach.
Nutter: Tonganoxie, it’s been a great ride
By Justin Nutter
November 26, 2014
In December 2011, I drove into a small town I’d never heard of in northeast Kansas for my first day of work. In a few days, I’ll leave that same town, which I have truly come to love and call my home. 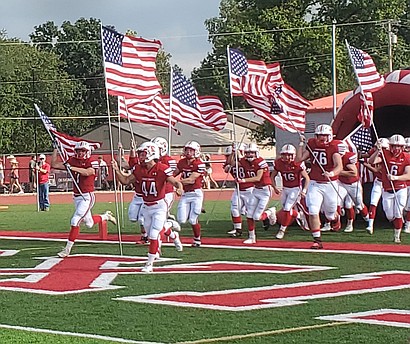 Tonganoxie High football players run onto the field carrying American flags Friday before their game against Basehor-Linwood. THS was honoring and remembering those who fought in the war in Afghanistan. The United States first launched military efforts in Afghanistan less than a month after the terrorist attacks on American soil on Sept. 1, 2001. The 20th anniversary of 9-11 is this Saturday. 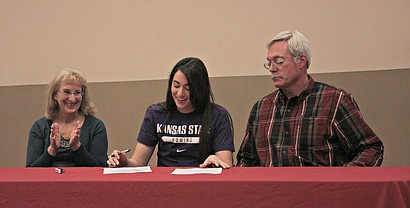 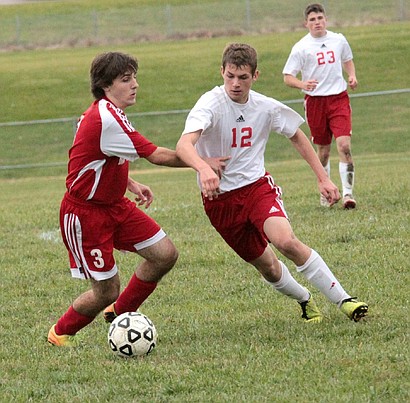 Jay Willcutt and the Tonganoxie High soccer team saw their season end Tuesday with a 3-0 loss to Bishop Miege in the state quarterfinals. 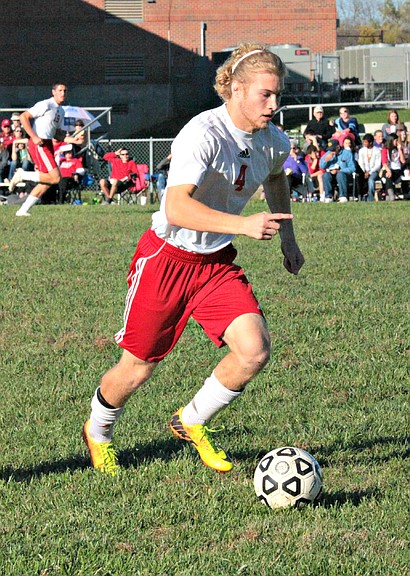