Matt Erickson is a staff writer for the Basehor Sentinel.

Former Westar chief, wife give rural Lawrence farmstead to Salina-based Land Institute
By Matt Erickson
July 30, 2013
65-acre farmstead is just northwest of Lawrence
Kansas: Mammoths may hold clues to early humans, researchers say
By Matt Erickson
July 29, 2013
The bones of a mammoth that died more than 15,000 years ago in what’s now west-central Kansas could hold revolutionary clues for a group of Kansas University researchers.
KU offering new science master’s program in Overland Park
By Matt Erickson
July 23, 2013
Program is to prepare students for scientific jobs in the business world
KU Med to share in $10 million gift from late dean, husband
By Matt Erickson
July 19, 2013
Stata Norton Ringle never stopped learning, and she never stopped giving back to Kansas University, either.
T. rex was a predator, KU researchers conclude
By Matt Erickson
July 16, 2013
You might not guess it if you’ve watched “Jurassic Park,” but for about 100 years, some paleontologists have argued that the famed dinosaur Tyrannosaurus rex was actually a scavenger that fed on carcasses, not the fearsome predator many imagine.
KU officials assessing effects of Legislature’s budget cuts
By Matt Erickson & Scott Rothschild
June 4, 2013
After the Kansas Legislature approved higher education budget cuts that one Kansas University official called “devastating,” KU leaders are working to figure out just where those cuts are going to fall.
Support both inside, outside classroom key when returning
By Matt Erickson
January 8, 2013
You’ve decided you’re heading back to school, and you’ve picked a program that will serve you well. But still, a lot of questions remain.
In step with neighboring communities?
Setting worker wages a balancing act for cities
By Matt Erickson
September 11, 2012
This year, the average police officer in Shawnee takes home an hourly wage of about $23.59, a rate equal to about $49,000 per year, not including overtime. Across the Kansas River in Basehor, the average officer earns about $16.76 per hour, equivalent to just under $35,000 per year.
Basehor-Linwood High School wins National Blue Ribbon Schools honor
By Matt Erickson
September 7, 2012
Basehor-Linwood High School was named a National Blue Ribbon School by U.S. Secretary of Education Arne Duncan on Friday, one of six schools in the state to earn the honor for 2012.
New Basehor-Linwood school lunches draw praise, criticism during first few weeks
By Matt Erickson
September 6, 2012
As Taylor Marcus munched on a slice of pizza in the Basehor Intermediate School lunchroom Friday, she remembered what the school’s pizza used to be like. 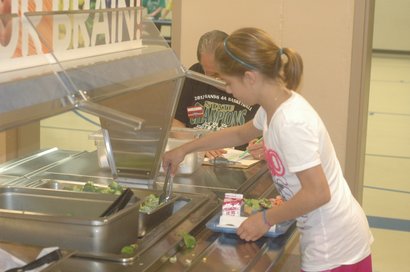 Dannielle White, a fifth-grader at Basehor Intermediate School, grabs some broccoli while loading up her lunch tray Friday. 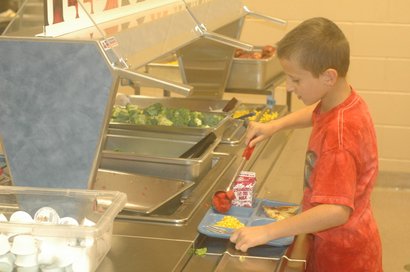 Josh Marcus, a fourth-grader at Basehor Intermediate School, scoops some watermelon onto his tray during lunch Friday. Students at BIS on Friday said they liked the school’s new meals this year, after the district switched to a private food-service provider. But some parents and students — especially at Basehor-Linwood High School — have complained about the change. 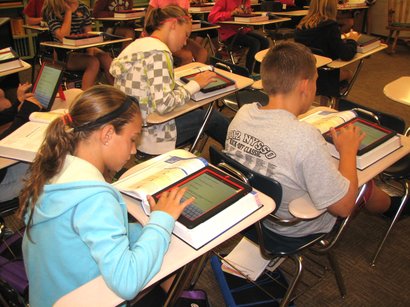 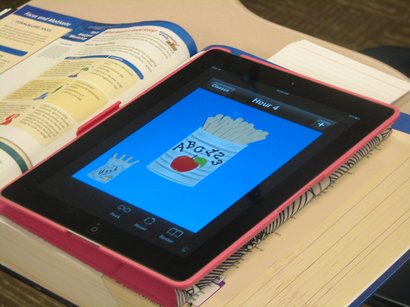 A picture of a can filled with popsicle sticks appears on the screen of reading teacher Juli Brown’s iPad. Brown used the app to randomly select students to take turns reading aloud to the class. 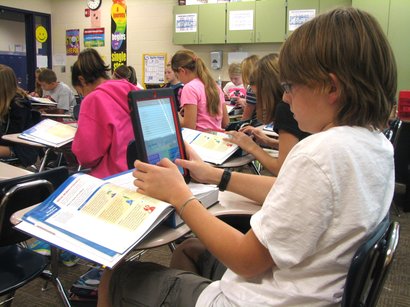 Basehor-Linwood Middle School sixth-grader Sterling Hollond taps on the screen of his iPad as he takes notes during his reading class Monday. Students used the devices for nearly the entire class period.