Todd Thompson, one of two Republican candidates for Leavenworth County Attorney says, "It's time for change." 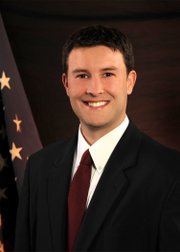 Thompson, a 2001 graduate of the Washburn School of Law, worked as assistant county attorney and head of the office's juvenile division for five years before being released by current County Attorney Frank Kohl on June 2, just three days after telling Kohl he would be running for the incumbent's job.

Since that time, Thompson has focused full time on campaigning for an Aug. 5 Republican primary, which pits him against Debra "Deb" Snider, a criminal defense attorney from Lansing.

Thompson spent four years working in the office of the 45th District state representative before returning to Leavenworth, his hometown, and he has since been elected as president of the Leavenworth County Bar Association.

Asked in a recent questionnaire what steps he would take to more effectively combat Leavenworth County's crime rate and put criminals behind bars, Thompson responded, "It's time to stop playing 'Let's make a deal' and start prosecuting repeat offenders. Repeat offenders must be appropriately sentenced."

Thompson also noted that communication between the County Attorney's Office, law enforcement and victims of crimes could be improved.

"Victims need more of an explanation of why or how a case is being handled," he said. "I will ensure we will have staff or the attorney handling the case to take specific time explaining what is transpiring."

He also stressed his lifelong ties to and experience working in Leavenworth.

"This is my community," Thompson said. "I've had family here for 150 years. I know the office and can easily be put in office and make it effective and efficient. I have the energy and drive to improve what's been lacking and the background, relationships and experience to do it.

The winner of the primary between Thompson and Snider will go on to meet Kohl, a Democrat, in a Nov. 4 general election.

For more information or to register to vote, contact the Leavenworth County Clerk's office at (913) 684-0421.