Area 4-H'ers traded in their livestock for robots and tractors for rockets during this year's technology camp.

4-H leaders say the camp goes along with a national trend in the 4-H club of expanding the program beyond the realm of agriculture to find ways of motivating youth and getting them interested in physical science. 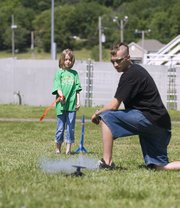 Jacob Reynolds helped the members of this year's 4-H Club tech camp launch rockets the 4-H'ers designed and constructed themselves. The camp also taught the Leavenworth County youths about robotics and geoscapings.

The week-long camp at the Leavenworth County Fairgrounds focused on robotics, aerospace engineering and geoscaping as well as learning about other sorts of scientific principals and pieces of technology. The camp ended Saturday with the 4-H Tech Day during which the 26 students in the camp raced their robots, fired off rockets and found hidden messages scattered throughout the fairgrounds by using a portable GPS unit.

"It's really neat and the kids get really into it," Brenda Taxeras, 4-H assistant, said. "They love the competition and get excited about science."

One of the main attractions on display during the tech day was the work done by a group of eight middle-schoolers. The youths developed a Web site that will eventually map out the location of several, if not all, of the former one-room schoolhouses in the county.

Hecht said it was a great way to have the kids learn about GPS technology and to help out the county, which does not have the resources to find the old schools themselves.

To do this, the 4-H'ers will need to connect with members of the community that know the locations of the schools.

"The kids are then connecting to the generation that we are getting ready to lose - the great-grandmothers that went to school there," Hecht said. "You have then an intergenerational understanding of history and they get to know their community."

Besides connecting 4-H'ers with the older generation, the camp also let the students connect with student teachers closer to their age.

This was the first year that 17-year-old Jacob Reynolds was able to teach the section on rocketry by himself.

He had previously taught the class with help from his older brother, Ben. But after Ben left to join the U.S. Marine Corps it was up to Reynolds to continue the tradition.

"[Ben] did a lot of the planning, a lot of the teaching and preparation of a lot of the materials, which looked easy until you had to do it yourself," Reynolds joked.

After teaching them the principles behind flight, Reynolds also helped the students build their rockets and took them out to an open area to see if they worked. Reynolds was hesitant about all of the work that was needed to teach the class but said it was worth it once he started interacting with the kids.