Author urges THS students to follow through on dreams

The cover of Marc Tyler Nobleman’s book shows the creators of Superman. Nobleman spoke to Tonganoxie High School students about his work Thursday. 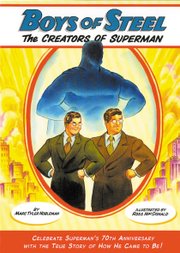 The cover of Marc Tyler Nobleman’s book shows the creators of Superman. Nobleman spoke to Tonganoxie High School students about his work Thursday.

Tonganoxie High School students learned they don’t have to be faster than a speeding bullet, more powerful than a locomotive or able to leap tall buildings in a single bound to be successful.

Writer and cartoonist Marc Tyler Nobleman presented that message to them Thursday morning at the Tonganoxie Performing Arts Center, one of a number of stops on Nobleman’s trip through Kansas, dubbed Superman’s First Home on Earth tour.

Superman, as the legend goes, was reared in Smallville, Kansas (a fictional town), and having recently penned a picture book biography about the brains behind The Man of Steel, “Boys of Steel: The Creators of Superman,” Nobleman wanted to speak to young people in the superhero’s supposed home state.

But the author’s presentation was less of a sales pitch and more of a message to students to follow their dreams and stick to their guns.

“Why can’t you work and have fun, too?” Nobleman asked. “There’s nothing that says you can’t.”

Writing and cartooning are Nobleman’s loves and he encouraged the students to be persistent in the face of rejection because that is what it takes to be successful in any aspect of life. 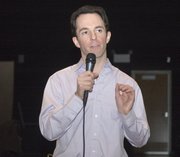 Nobleman, who also is a writer for Nickelodeon magazine, said his line of work requires him to constantly persist through rejection and he has learned to never stop knocking on doors. He continues to produce new material even as he receives rejection letters for other ideas he has pitched.

“Once you get a yes, you don’t care about the no’s anymore,” Nobleman said, adding that he isn’t afraid of rejection, he simply fears the concept of never trying.

A freelance cartoonist and writer, Nobleman shared excerpts from some of his rejection letters and experiences and offered stories of how many world-renowned successful people have struggled — the first Harry Potter novel was passed on 12 times, Dr. Seuss’ first book was refused 22 times and about 1,000 people turned down the idea of Kentucky Fried Chicken. Nobleman said he enjoys relaying those stories of famous one-time failures to kids because they might realize even highly successful people have taken their lumps.

“It’s really empowering to hear that they did because it makes people realize: ‘If they went through it, I can go through it.’ And this is the age to do that, when they’re still young,” Nobleman said. “It has to be absorbed when you’re young. Once you get too old, you get cynical, you don’t listen anymore.”

It turns out even Superman’s creators struggled to get their idea off the ground. Nobleman said there were no superheros when writer Jerry Siegel and artist Joe Shuster came up with Superman during the Great Depression in 1934.

“They had a new idea,” Nobleman said, “and when they tried to sell this idea to newspapers and comic book companies they were turned down for 3 1/2 years.”

The writer/cartoonist said hearing such stories puts rejection in perspective. He told THS students there are plenty of ways to respond to getting turned down — from getting angry, to crying to persevering. But he warned there is one response that never works.